Forward Observer: Vet Center Counseling Now Available During Training or Drill Weekends for the Guard– BUT NOT SO MUCH IN THE LEHIGH VALLEY?

On 27 August the U.S. Department of Veterans Affairs (VA) announced it had formalized a partnership with the Department of Defense formalized a partnership on 28 June between VA’s Vet Centers and the National Guard Bureau, to provide Vet Center counseling, outreach staff and other services to members during training or drill weekends to decrease their suicide rate — a reputed problem in the Pennsylvania National Guard. END_OF_DOCUMENT_TOKEN_TO_BE_REPLACED

Comments Off on Forward Observer: Vet Center Counseling Now Available During Training or Drill Weekends for the Guard– BUT NOT SO MUCH IN THE LEHIGH VALLEY? |

By now everyone should know that the U.S. Department of Veterans Affairs (VA) is in love with telehealth; moreover, telehealth apps.  One end result is a multiplicity of them.  On 13 August, the VA announced it had recently launched a new mobile application to save veterans and caregivers time online. It claims the VA Launchpad for Veterans simplifies and organizes several existing tools and resources at one convenient location — to help manage health care needs. END_OF_DOCUMENT_TOKEN_TO_BE_REPLACED

On 22 July, the Military-Veterans Advocacy, a nonprofit legal organization which had a major role in overturning the VA’s decision not to process Blue Water Navy veterans’ Agent Orange claims through a remarkable legal action (Procopio vs. Wilkie), is now asking a federal judge to rescind a stay on Blue Water Navy claims processing imposed by Secretary Wilkie, aided and abetted by the U.S. Congress for good or ill. END_OF_DOCUMENT_TOKEN_TO_BE_REPLACED

The U.S. Congress, which previously lacked the courage to act on this longstanding issue until after that court decision, now gives the VA until 1 January 2020 to begin deciding Blue Water Navy related claims for those who served in the territorial waters of the Republic of Vietnam (defined in the Act) between 9 January 1962 and 7 May 1975.  The VA has stated that veterans over age 85 or with life-threatening illnesses are to have priority in claims processing.

From another point of view, this action gives the VA the necessary time to ensure it has the proper resources to process an anticipated onslaught of veteran and survivor claims.  During previous testimony, it was estimated that between 52,000 and 90,000 veterans were affected.  For some reason, it is now estimated that between 420,000 and 560,000 Vietnam-era veterans may be considered Blue Water Navy veterans.

However, these affected veterans are encouraged to submit their disability compensation claims for conditions presumed to be related to Agent Orange exposure now.  And, those veterans who previously were denied for an Agent Orange related presumptive conditions should file a new claim based upon this change in law.  Eligible survivors of Blue Water Navy veterans may also benefit from the new law and should consider resubmitting their claims if previously denied.  We still recommend you consult an accredited Veterans Service Officer — and not do this action on your own to ensure a thorough review of your situation.

Understand that under the new law, the veteran must have a disease associated with herbicide exposure, as listed in 38 Code of Federal Regulations section 3.309(e).  The presumptive conditions which currently apply are:

On 5 June 2019, the VA finally announced the new rules of the game for three vital services under the MISSION Act of 2018: END_OF_DOCUMENT_TOKEN_TO_BE_REPLACED 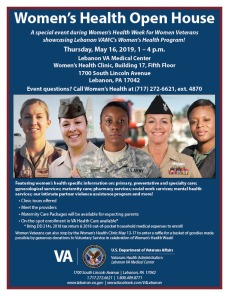 The above, recent flyer from Lebanon VA Medical Center provides us the opportunity to remind our local women veterans that the U.S. Department of Veterans Affairs has improved its women’s health program substantially over the last few years.  It is not a perfect system, but it is an improved one.  The more advanced VA Medical Centers, such as in Lebanon and Philadelphia, have their own women-specific clinics.  For Wilkes-Barre VAMC, which serves the majority of our women veterans using VA healthcare, click here to find out what is offered, for the women’s program manager, and about its women’s clinic on the second floor of the hospital, though not listed in its directory of services.

Women veterans, considering the changes in progress as a result of the Mission Act and the high cost of private medical care, ought to investigate this program if they have not.

Forward Observer: How Good is the VA Healthcare System?

These days many people are attacking the VA for its quality of care, especially those seeking to privatize the system entirely, as opposed to those wanting to improve staffing and access to care (which involves contracting out also).  Most healthcare systems in our vicinity would be found as wanting if held to the same level of scrutiny.  In many instances the problems are furthered by the competition for resources in short supply (e.g. medical professionals) versus the sharing of them — which is typical of other businesses.  Yet, not infrequently the quality of care provided by the VA (socialized medicine, incidentally) is superior; and the reportage on that quality (transparency) is currently unrivaled, frankly. END_OF_DOCUMENT_TOKEN_TO_BE_REPLACED

Comments Off on Forward Observer: How Good is the VA Healthcare System? |